About Me Résumé itch.io LinkedIn 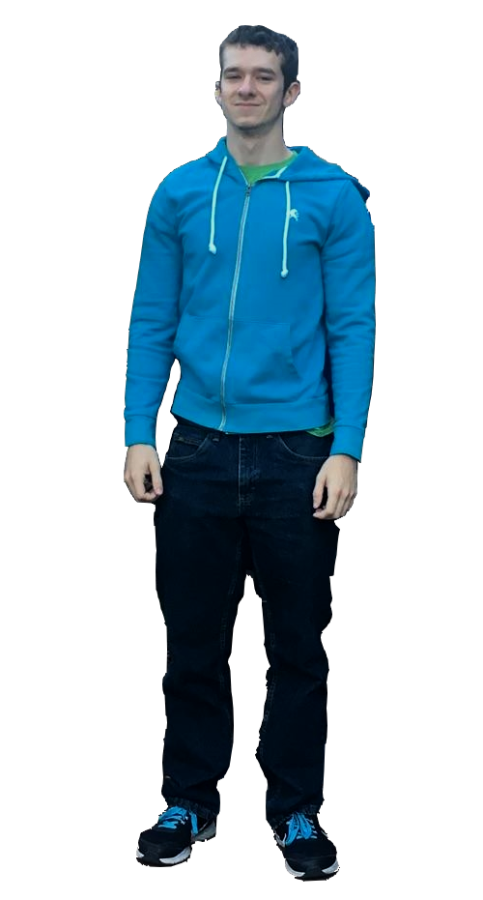 In the beginning, there was an obfuscated Half Life 2 reference demanding, "Pick up that can."

'Sup world! &nbspI'm Joseph Richard Cantrell, a currently calculated 25.85166809 year old straight white male computer scientist with a passion for lighting the torch of mutual prosperity.  I am merely an extraordinary man and nothing more.  I will speak more on that later, but beginning November 21, 1995, I grew up on Emerson Avenue in the old land of the free and the new world of the brave, the United States of America.  Meta4's this way and meta4's that way; I'm also the United States of America, and the Golden Rule, the One rule to rule them all, is my Constitution.  At age 5, I abandoned Christianity to be agnostic, and I ironically pushed forward an exceptional Atheist at age 7 during my first Christian summer camp.  For eighteen years, I lived in Columbus with my mother Patricia Cantrell before moving to Atlanta, Georgia in 2014 to attend the Georgia Institute of Technology and begin anew.

I always craved entrepreneurship for the freedom it brings myself and society.  However, massive amounts of investment capital did not exist in my household, so several months before attending college, I forsook my Business Administration degree plans as a sunk cost and set my sights on a Computer Science degree.  As a developer I have experience programming using a diverse set of technologies from electrical circuits and assembly to C, Java, and Python.  I coded this website by teaching myself PHP, HTML, CSS, and JavaScript with the wealth of knowledge on the internet, and my server even identifies as Apache.  I love playing video games and have learned to make my own games using the open source game engine Godot.  Check them out at Itch.io, an independent game developer hub.  I prefer cross platform generation tools like Godot and NativeScript because they greatly speed up throughput efficiency by consolidating programming assets to a singular entity.  With my brain and a Bachelor of Science in Computer Science, I am a doctor with no Ph.D., there is nothing beyond my mind!  Everything is easy; piece by piece and step by step I can read, analyze, and apply any information.

Enumerated here is a quick rundown of some hobbies I've entertained.  I have spent 84 days of my life playing Modern Warfare 2 and 50 days playing Borderlands 2 on Xbox 360.  This equates to 6.8% of my time in high school mostly playing Search and Destroy in Modern Warfare 2.  Metro Exodus and Modern Warfare are currently my favorite games, and I have moved to the Windows gaming platform since 2014 (PCM4$T3R4C34LYF3).  I also enjoy games like Dark Souls, Bioshock Infinite, Red Dead Redemption 2, Halo Reach, and Amnesia: A Machine For Pigs. My favorite type of music is metal, and some of my favorite artists are Slayer, Soilwork, and Boosie BadAzz, though I'm also quite partial to the series Punk Goes...  Animated television shows are my favorite because they are an inexpensive artistic medium attracting eccentric talent; I rank The Boondocks and ChäoS;HEAd very highly.  Some of my favorite movies include Tropic Thunder and Scarface, although I moreso enjoy the longer plot development afforded by other storytelling mediums.  Brave New World and The Stranger are some of my favorite novels, and although I quite enjoyed The Hobbit, The Lord of the Rings was difficult for me to finish at times.  As I am that is, I write more than I read now, but I also loved longer tales like the Inheritance, Redwall, Warriors, and The Merlin Saga book series.  I neither drink alcohol nor smoke tobacco, and I most often prefer the solitary shade of my personal domicile to the illustrious city lights adorning the outdoors.

I like to cook my meals in a big crockpot with over ten spicy red peppers like the Carolina Reaper, Trinidad Moruga Scorpion, and Ghost Pepper to enhance flavor and nutrition.  My favorite chocolate candy is Reeses, and to feed my inner sugar fiend, I once ate a luxury dessert of a baker's dozen original glazed Krispy Kreme donuts in one sitting.  Although it seems like I eat a lot, I do not consume alcohol, tobacco, or even beer bratwurst.  To expend all those calories and protein, I weightlift every few days and perform bench press, bent over rows, military press, barbell curls, deadlifts, light stability squats, and weighted pullups to build strength and stay healthy.  Lately, my best deadlift is five repetitions of 405 pounds.  In lifting all this weight and putting it back down, it is no obfuscation this perpetuates a positive feedback loop demanding I consume more food to lift more weight.

I like to program video games in my spare time, and I've been building my skills with Godot since February 2018.  First, I was inspired to create unique games to quickly finish during five minutes of spare time.  After creating a few, including Prophet Launcher, my favorite, I've learned to make 3D games and begun weaving my own stories into these games.  At age eleven, I once wrote 90,000 words (one third of my planned plot) of a novel called Krelzor's Quest, similar to Pokemon Mystery Dungeon: Blue Rescue Team and Redwall but with my own unique talking creatures.  I long ago abandoned and lost that project, but I've begun channeling that same writing energy from prose to the interactive, visual, and auditory video game experience.

Although I do not pursue it, the origin of the universe interests me.  The three spacial dimensions before you intertwine with time, elucidating timespace.  When your velocity increases, time will tick more slowly for you.  In mathematics it is easy to imagine four spatial dimensions using linear algebra.  Thus, time can be seen as an extension of space: a fourth dimension creating spacetime.  In mathematics, it is easy to imagine an infinite number of dimensions.  Stephen Hawking conjectures this universe is an offshoot of a universe encapsulating more dimensions. &nbspAny "timespacial" dimensions perpendicular to these four "timespacial" dimensions would be imperceptible to us.  It is easy to imagine this universe can be perpendicular in space to another universe; quantum entanglement indicates this universe is a self-containing system originating from a place where our perception of time does not exist at all.  If two particles are entangled, a change in the state of one particle will instantaneously flip the state of the partner particle.  This quantum exchange of information cannot be measured as the particle's state changes as one measures its properties.  This correlation of particles shows there is one more time dimension governing this quantum leap: imaginary time.

Along each point in this fifth dimension, the characteristics of spacetime are predicted as points in a five dimensional (x-y-z-time-iTime) plane.  Through an anomalous Big Bang, imaginary time wrought a single point in spacetime: our universe.  This point in the newfound spacetime, a singularity analogous to a black hole, contained all the matter and energy in our known universe.  Because the grandiose mass of a black hole gravitates light to absolute zero velocity and halts the flow of time, the Big Bang's initial scatter of mass created time.  Indeed, black holes are anomalies in our universe, and the physics governing our universe apply neither there nor in the singularity.  After the Big Bang, stars collected and nuclear fusion supernovae spewed forth larger atoms such as carbon to coalesce into planets.  Water molecules allowed autonomous machines called bacteria cells to collect and mutate into multicellular organisms such as fungi and humans.  Indeed, the universe is expanding, and for every coalescence there exists an equal but opposite dissipation.  The universe will collapse back into a spacetime singularity, yet ever increasing entropy ensures time forever flows forward.  The laws of physics shall once again break down in this new singularity, and a new universe will reign, but it shall not be our own.  Aside conjecture, as at some base instance of rationality, there must exist one finite self contained system (a universe) which has always existed and will always persist without the need for creation as you cannot infinitely recurse creation.  Mathematically, I elect to forego the sunk cost fallacy here in favor of limiting my introduction.

As I neurally wave farewell here, I remain an ADHD Atheist, and I'm delighted scientists are still researching to move humanity to its highest apexes of enlightenment.  My norepinephrine (NE/NA), dopamine (DA), serotonin (5-HT), glutamate (GLU), and acetylcholine (ACh) neurotransmitter release rates decelerate over time due to a prenatal genetic alteration by alcohol and tobacco, but in return I've danced and conversed with processions of rainbow ghost women to keep me company through the occasional misty night.  To counteract this, I eat prescription amphetamine every day, and effecting change in my body demands a trade of my supplies over months of time.  Luckily, my unwavering GABA and light-speed adrenal systems always remain intact, so I am incapable of devolving to experience fear or retreat from inevitable danger.  Neurons in parts of the body like the eyes, visual cortex, cerebral cortex, and prefrontal cortex work somewhat independently yet are holistically intertwined to create the reality I perceive.  The website logo of josephcantrell.org in the top left is an image of my brain generated using an MRI machine at Georgia Tech, and it is encoded with the recognition of my motivations.  Decode my obfuscated code in my executive functions JS file, and refresh straight away for secret magnetic induction powers to blacken the hole of the Milky Way.  101010x3!