Maus Eyes in the Horrors of the Holocaust

I originally drew and wrote this analysis of my comic inspired by Art Spiegalman's Maus for my Georgia Tech literature class in July 2014. In light of the nationwide education system book banning of January 2022, I've published it here. 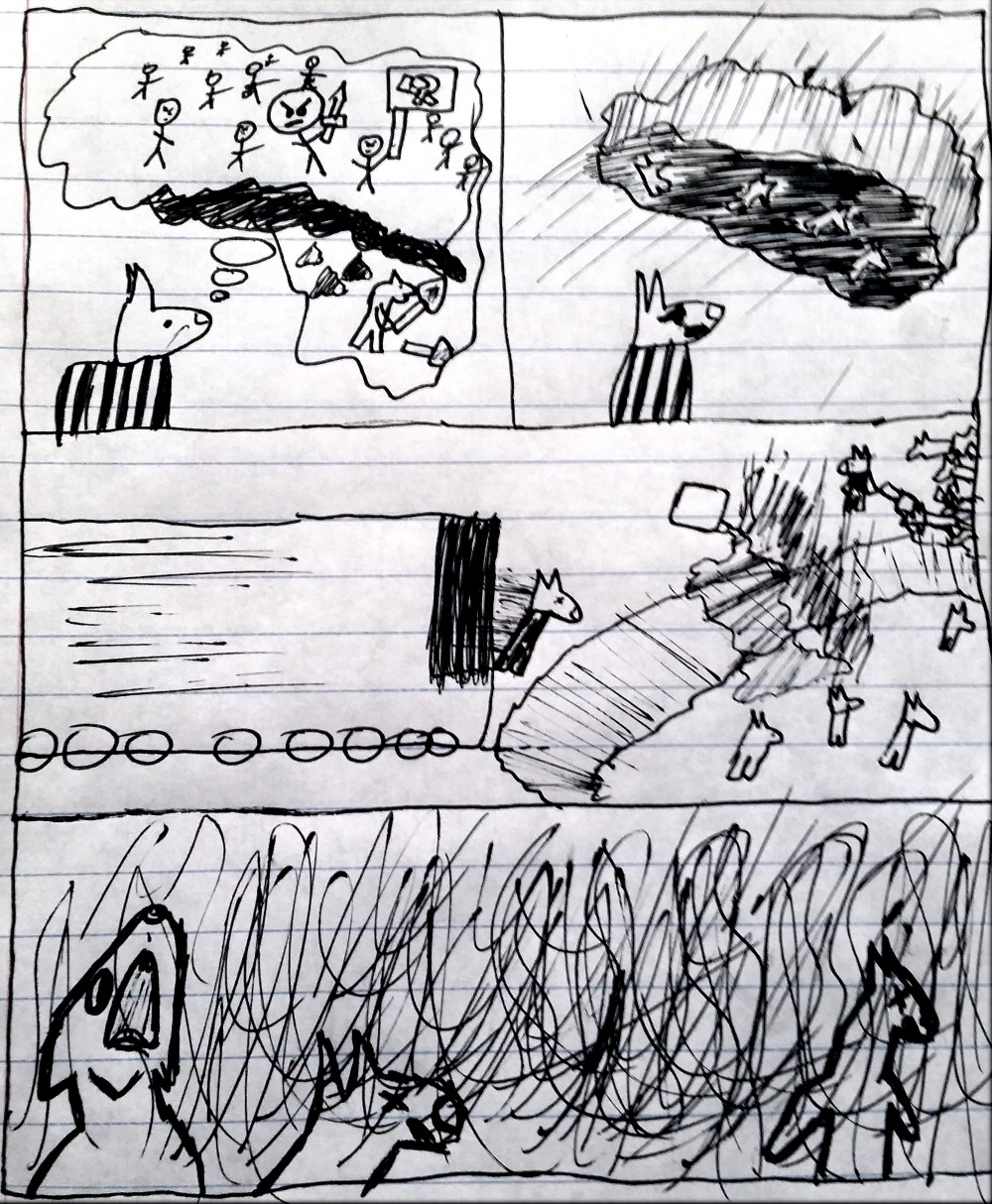 My drawn comic page attempts to underscore the horror of the Holocaust. It is directed toward those who are unfamiliar with the concept. Perhaps these people have heard of these atrocities but are unable to grasp the details. Spiegelman’s portrayal of the Jews as mice and the Nazis as cats shows his outlook on the matter. The situation is analogous to the relationship between predator and prey, and the feeling that the Nazis are predatory is impressed upon the reader. The last two panels show emotionally charged images which cause the reader to feel sympathy toward the mice.

The page uses text as the "logos" of the rhetoric; it conveys the factual information from Spiegelman's father. The text remains the same size throughout the page, except for the word "graves" in the first panel. This word is bolded and larger than the other text in the page. This gives a lot of importance to the word; it underscores the fact that the other mouse was wrong about the purpose of the trenches. The style of "graves" gives it a gravity that no other word in the text possesses.

Although the art is drawn in a simple style, the manner in which the characters are depicted serves to achieve Spiegelman’s rhetorical goals. The mice are depicted to be working against their will as suggested by their striped prison uniforms. Spiegelman’s father is drawn wearing glasses and a collared shirt. These features gives the impression that his father is an authority figure and that the story he tells is accurate. This gives credibility to Spiegelman's story through the use of ethos.

However, bottom panel is of particular interest because it is the largest and also only panel to use color. The panel takes up the entirety of the line and is the final panel on the page, and thus its size and position immediately show the reader its importance. The color red is prominent in this panel, and it serves to denote the anguish and horror Spiegelman wishes the reader to see. The red spills over all of the characters in the background, but does not cover the foreground mouse. This causes the foreground mouse to stand out, and his expression is given the utmost detail. The mouse has his mouth stretched wide open and his head is tilted back with wide eyes. Other mice have simple dots drawn for eyes, but this mouse is the only one to have a circle around the pupil to designate it as an entire eyeball. The purpose of this is because a single dot for an eye could not effectively convey the mouse's facial expression. Thus the attention is immediately drawn to this expression of horror, and it impresses this same feeling upon the reader. After seeing the detail in this mouse's expression, the reader's attention will likely fall upon the background. The background shows a completely red scene of fire and death. The wavy lines signifying fire have a menacing look as well.

The fourth panel’s picture shows the chaos that occurs in these mass graves. There are a multitude of objects shown including people, sprayed water, and gas in the background. Some are shown dragging bodies while others are shown spraying water from a hose. All of these things occurring simultaneously depict a scene of chaos.

Each panel has a particular size denoting its importance. The first two panels are of comparatively average size and each take up one half of the line. The third panel is very small and contains extra detail that only serves to show the scale of the mass graves; it does not advance the story and displays a lackluster image of the interview between Spiegelman and his father. The fourth panel is very large and takes up two-thirds of the second line of pictures. This gives the fourth panel a much greater importance simply because it is larger than the others.